Imagine a multi-use building complex that has almost 2.3 million square feet – so large, it takes years to build. It houses a 24-story office space, a 34-story residential space, shops, restaurants, a convention space, museum, and parking.  The price tag is $400 million.  The complex is “Fifth+Broadway” in Nashville TN. Recently, CoatingsPro Magazine featured CIP for its outstanding work on this project. 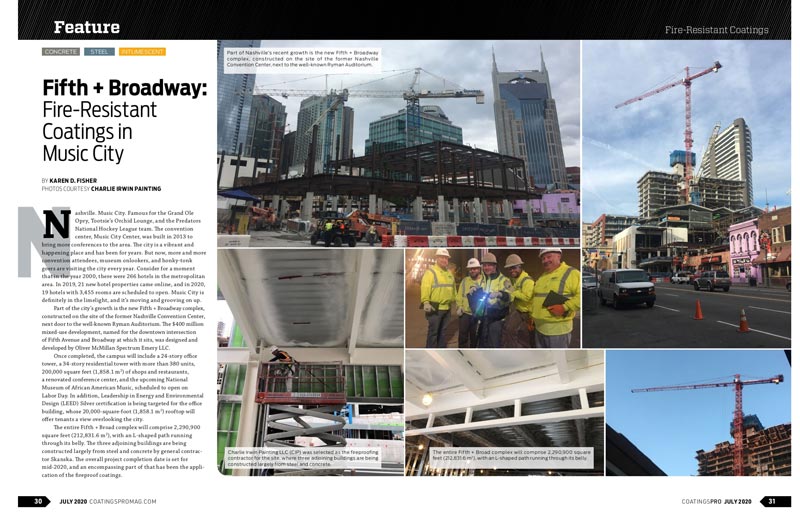 No Job Too Big

CIP is a painting, sandblasting, and commercial fireproofing company. When we say, “No job is too big,” we mean it! Our 8-12 men crews worked relentlessly on the Fifth+Broadway project for two years, fireproofing steel structures throughout the complex.

No Job Too Difficult

Several complications surfaced during this 2-year job. But, as always, CIP rose to all challenges.

The first complication arose early in the project. It was November and the weather was cold. No HVAC had been installed yet, so we tarped off areas where we were working and heated those areas with diesel heaters provided by the GC.

The last complication came when we were spraying fiberglass insulation onto the concrete slabs. When we began this part of the job, we realized our current Accu1 machines were not going to be up to the task.  So we purchased new Krendl 2300 insulation machines to meet the challenge.

The CoatingsPro Magazine article about CIP’s work on this project goes into great detail about the methods and materials we used. If you would like to read the full article in which CoatingsPro Magazine featured CIP, click this link: Fifth+Broadway: Fire Resistant Coatings in Music City.