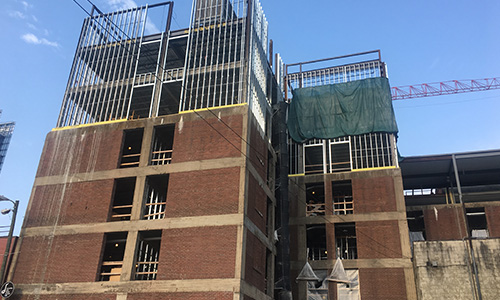 A new “Moxy” is under way in downtown Nashville at 110 Third Avenue South, and CIP is providing the commercial fireproofing and commercial painting of the historic, old building for The Parent Company. The Moxy is Marriott’s newest brand hotel in its 3-star-tier segment.

Developers of the property, which was formerly occupied by the records storage company Richards & Richards, are preserving the bottom three stories of the building for their historic value.  To add more space for more rooms, they are building up—that, is adding more floors to the top of the building. 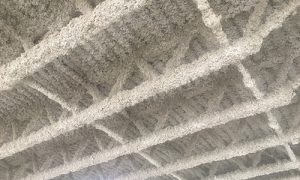 “Historic” buildings usually have to under-go upgrades to meet various codes during renovation. In the Moxy building, the original concrete ceiling did not meet fire codes for an exposed ceiling. To remedy this, we applied a product called Isolatek Blaze Shield II, which is an SFRM (Spray Fire Resistant Material). The photo on the left shows the exposed ceiling with the SFRM.

Additionally, we fireproofed the new steel at the top of the building. This is necessary to prevent or delay the failure of steel due to the intense heat of a fire. 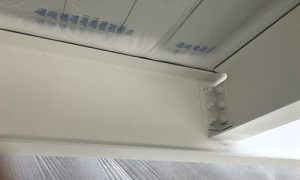 Commercial Painting of the Nashville Moxy

CIP will also be doing the commercial painting for the Moxy. The hotel is set to open in the first quarter of 2019, so the painting stage probably will not start until later this year.

According to Marriott, the Moxy hotels have “buzzy and stylish communal spaces.” So, the commercial painting part of this project may prove to be very interesting and creative.

At CIP, we can meet all your fireproofing needs. We are experts in

To learn more about all of our commercial fireproofing services contact CIP at 615-790-8822.