On January 6, 2016, General Contractor T.W. Frierson awarded CIP the contract for painting a 500,000 square-foot warehouse owned by Sinomax in LaVergne, TN. Sinomax is a manufacturer in China that makes memory foam mattresses and pillows. The photo below shows the warehouse before it was painted.

Scope of the Project

The finish painting is shown in the photo below.

The East Side Challenge

The interior east side of the warehouse, a total of 250,000 square feet, had to be completed in a quick time frame so that the owner could start assembling manufacturing equipment in that area. We started painting the east side of the warehouse interior on January 11, 2016 and completed the painting on January 29, 2016, finishing that portion of the work three weeks ahead of the contractor’s schedule. To accomplish this quick turn-around, CIP had as many as 12 painters,  spray machines, and 8 different 32’ aerial lifts (shown in photo) in operation at one time. 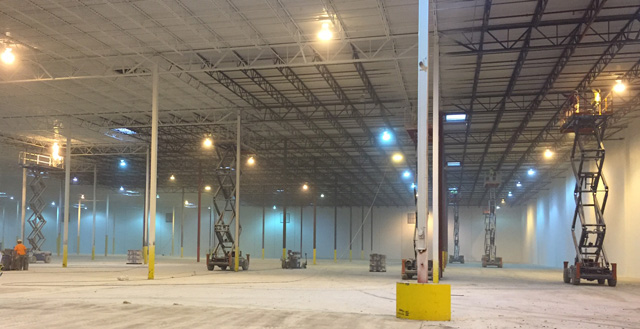 After finishing the east side, the interior west side of the warehouse and the outside of the building remain to be completed. CIP is working steadily to deliver an on-time completion date for this entire job. The contractor’s desired completion date is July 1, 2016.